As part of the program “Authors to KIPP LA” (A to KLA), national best-selling author, political commentator, and social justice advocate Julissa Arce joined the eighth-grade students of KIPP Sol Academy in East Los Angeles for a presentation, Q&A, and book signing of her new YA memoir Someone Like Me: How One Undocumented Girl Fought for Her American Dream. In the book, Julissa shares her secret life as an undocumented Mexican immigrant in Texas, and her ability to overcome challenges associated with her status to eventually become a successful vice president at Goldman Sachs. Read on for more details. 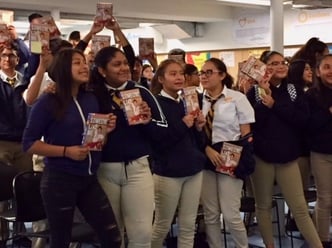 KIPP Sol students are known as “advocates” on the campus, and may participate in an advocacy in action elective led by teacher Christopher Peck. Participating students auditioned to introduce Julissa during the A to KLA event. Students Maybrit and Betsey were excited about the opportunity and collaborated on a drafted introduction, which ultimately earned them the role. “My family descended from Mexico so I’m really honored to get to meet [Julissa] and to have introduced her,” shared Maybrit. Betsey added that this public speaking opportunity is one of the many ways the the teachers at Sol “push us past the limits and barriers we put on ourselves. They always advocate for us, and we have also learned to advocate for ourselves and advocate for other people.”

Amid the student Q&A, one KIPPster asked Julissa why she decided to write Someone Like Me. She responded first, more generally, by saying that after being inspired by the activists who marched from Miami to Washington to protest the separation of immigrant families, she felt it was her responsibility to also share her story and “be part of changing the narrative of what people think undocumented people are and why we come here.” She then went on to explain that she chose to write a YA book specifically because “I never read any stories that reflected my story when I was your age, and I want to make sure you all know stories like mine and yours are so important that people write books about them.”

Thanks to the generosity of the Terry Gilman, founder of the A to KLA program and owner of Creating Conversations, each eighth-grade student will have the opportunity to read Julissa’s story as they have all received a free, signed copy of Someone Like Me.

For more information about the A to KLA program, click here. To support programs like A to KLA visit kippla.org/give.