MIddle-school students at KIPP Academy of Innovation in East Los Angeles recently participated in a special, virtual reality experience presented by Uber and Bell Helicopter. The companies are partnering to develop flying air taxis and wanted to share the future of technology with the future generation of engineers, scientists, designers, and mathematicians. Read on for more details. 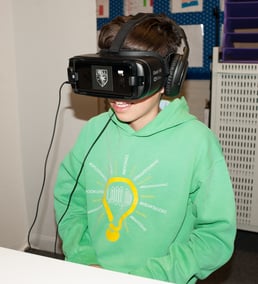 Scott Drennan, the Director of Innovation at Bell Helicopter, shared his advice on a career in STEAM (science, technology, engineering, arts, and math) with students at KIPP Academy of Innovation, which is KIPP LA’s first STEAM school. He told students that they should remember two important things that would give them an advantage over others in their careers: 1) never say no to yourself and the dreams you have and (2) keep your “kid mind,” including your creativity, imagination, and curiosity.

Hailey, a seventh-grade student at KAI, found Mr. Drennan’s speech to be particularly impactful, noting that “you know yourself better than anyone and should always stay true to yourself because that’s going to ultimately get you where you want to be in life and help with your happiness and success.”

Each student had an opportunity to play with the VR headsets, choosing among different scenarios that transported the viewers across town in a helicopter.

Natalia, another KAI student,  experienced virtual reality for the first time during this event and said it was “the best minute of my life. I feel blessed that I was able to do this. Our school in general does a lot of cool things, but this was REALLY cool.”

“Part of my role is creating opportunities that give our students access and exposure to a variety of different subjects in STEAM and beyond, so they can discover their passion for what they want to do in life,” said Alice Lai, Founding Principal at KIPP Academy of Innovation. “We hope that this event inspired our students and encourages them to see themselves in the careers of the future that we can’t even imagine yet.”