Students around the world are participating in the Hour of Code event, a global movement designed to expose students to computer science and show them that anyone can learn the basics of coding. Several KIPP LA students engaged in the Hour of Code as they prepare for a region-wide coding challenge. Read on for more information.

Nearly all KIPP LA students joined students from over 180 countries to participate in the fourth annual Hour of Code event during Computer Science Education Week from December 4-10, which recognizes the birthday of computer pioneer Admiral Grace Murray Hopper.

At KIPP LA Public Schools, students are exposed to computer science as early as kindergarten and each KIPPster has access to their own Chromebook in the classroom, so participating in Hour of Code is a great companion to their learning.

There are many advantages to introducing young students to computer science including job readiness for future careers in high-paying computer programming and STEM positions, but there are additional benefits, as well. Elisabeth DiCarlo, KIPP LA’s Manager of Innovation, finds that tech programs like Code.org and Tynker help children in their daily lives as they “develop problem-solving and logic skills, and provide them with the opportunity to express themselves creatively and collaboratively.” 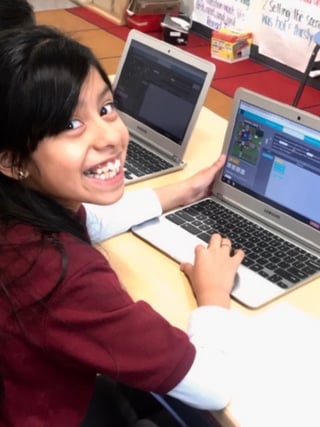 The students enjoy the creative freedom and autonomy of coding. Dion, a fourth-grade student at KIPP Empower Academy, wants to be an engineer when he grows up because “I like creating my own world. My friend and I built a mansion and a church and a hotel. And we have a LOT of pets!”

In order to encourage additional coding beyond the Hour of Code, Ms. DiCarlo and her team have created an Hour of Code Challenge for all KIPP LA students that runs until early January. Students participating in the challenge are asked to create a program, project, or game demonstrating the theme of “acceptance” with a clear beginning, middle, and end. Outstanding projects will be featured in KIPP LA’s signature MOKA (Museum of KIPP Art) fundraising event in June.

By providing the students with a storytelling prompt, Ms. DiCarlo believes more students will be motivated to participate and that the projects will better showcase their talents in both technology and creativity. “So often in our society there is the mindset that you are either a tech, STEM, math person or a creative person and I don’t think the two are separate at all - there is an intersection of these skills, which is a really beautiful thing.”