While May is Mental Health Awareness month, KIPP LA invests in the social-emotional development and mental health of students all year round, including our LGBTQ+ students. We believe that all students can succeed if given the right opportunities and support.

This year, KIPP LA became the first charter public school to partner with the Los Angeles LGBT Center’s OUT for Safe Schools campaign, which encourages educators to publicly identify as supportive LGBTQ allies on campus by wearing a badge. The badges help to foster a more inclusive and celebratory environment, and are available to all KIPP LA team members including kindergarten teachers. According to school leader Dr. LeAnna Majors of KIPP Compton Community School, “it’s never too early for students to be comfortable trusting who they are. This is something that happens over time.”

In addition, the KIPP LA Support Services team provided professional development to all KIPP LA schools through a session called “Supporting Gender Expression and LGBTQ Youth in Our Schools,” created with support from the OUT for Safe Schools Program Coordinator. 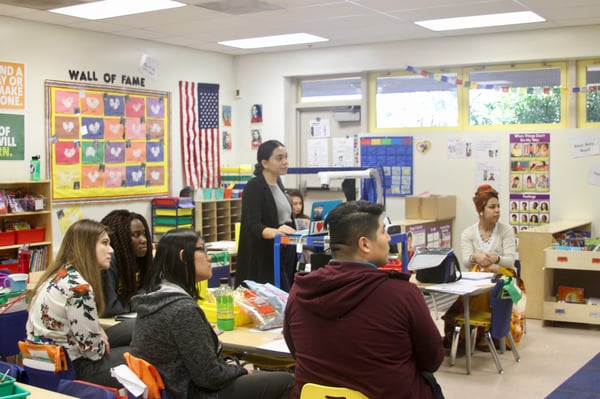 According to the 2013 GLSEN School Climate Study, school personnel are the most critical in building communities where students feel safe, secure, and accepted. It takes seven supportive adults to counteract one incident of bullying amongst LGBTQ students. And the consequences of bullying affect the mental health of transgender people in a major way. In fact, 41% of transgender adults have attempted suicide, compared to only 1.6% of the general population.

KIPP LA’s mental health program manager, Laura Flann, notes that the push for trauma-informed mental health and support services for LGBTQ students stems from “promoting equity by putting more resources and support in those particular populations who are most at-risk and disenfranchised.”

Philip Reyes, a KIPP LA resource specialist program teacher who attended the session, learned new ways to be inclusive in the classroom and believes that by educating elementary-aged students on gender identity and sexual orientation we will become a more successful, diverse, and inclusive society “where everyone is accepted regardless of their identity.” He also believes more schools should have KIPP LA’s mentality of “inclusion toward everyone.”

There are multiple ways to be LGBTQ+ Allies: